Tours can be tailored to individual needs, length of tour, aims and specific focus. They can include, for example, general history, the Civil War, Victorian or Georgian architecture, pubs of Chester,  Chester cathedrals (yes, we’ve had two!), the Mystery Plays. And of course, the ghost tour….

Walk through 2000 years of history, from Roman times to the present day. This will give you a good general knowledge of the history of the city and its highways and byways.

This was a major period in the history of Chester which has left its mark around the city. See where people fought, where people starved and where the city suffered. See also where Charles I and his handsome nephew, Prince Rupert, stayed.

Explore the splendid examples of architecture by some of the foremost architects of their day. Perhaps even end with a drink at one of their houses! 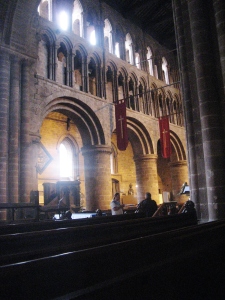 The present cathedral and the previous one, St John’s Church: this tour will focus on their history and development, including recent research. (Please note, this will not include entry to the Cathedral.)

Chester is home to the most complete set of Mystery Plays in the country. Written and performed originally by the monks in medieval times to tell the stories of the Bible, they are still performed every 5 years by local amateur actors. In 2013 they take place in the Cathedral itself for the first time in their history and promise to be a spectacular event. Follow the Mystery trail with Mary Ann –  find out what a wicked woman she was in the 2008 Mysteries and how she was forced to go to hell in 2013!

Chester can easily claim to be the most haunted city in the country with ghosts lurking in almost every corner. Mary Ann, dressed as a ghost guide should, takes you round the town and tells you tales of ghosts who still make their presence felt. This tour is particularly recommended for children’s birthday parties, aged about 10 and above. For older people it could also be combined  with a Pubs of Chester tour.

Chester is blessed with a number of fine pubs which combine excellent architecture, history and good beer. And a few ghosts, of course!

Tours can be arranged in the following languages: French, German, Spanish and Japanese.

To discuss details of all tours, please contact Mary Ann.